I know what it feels like, to see Katy Perry in that gorgeous sea blue denim dress when you just got that golden leopard print high neckline dress that she wore last VMAs 2013. VMAs 2014, not only gave us a lot of buzzes to care, speak and think about but also a lot of things to stare and get jealous about. If truth to be told, this year pop idols have certainly amused their real-life temperament in a smouldering voluptuous way. So, let’s find out who rocked the red carpet and provoked paparazzi to start the war of camera flashes. 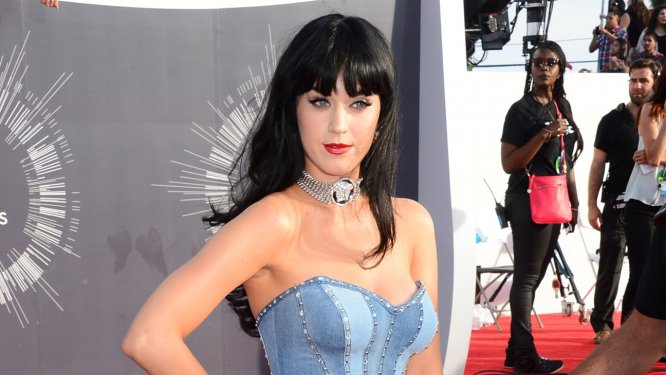 Jennifer Lopez – With a hashtag of #jlobooty, Miss Lopez unveiled the hype even before the media could by uploading pictures of her exposing her sleek thigh flesh in a silver sequin-cut long robe before the event on Facebook and Instagram. Her feet and hands were bejewelled by the similar silver heels and accessories correspondingly.

Taylor Swift – who appeared to be publicizing more of her album 1989 Era too defied other women by showing all of her slim sexy legs and her torso roofed by the courtesy of a glossy hydro-blue Mary Katrantzou dress. The young blonde-beauty was spotted socializing with each Jessie-J and Jennifer Lopez for their social network fans.

Nicki Minaj – The butt plunging rap queen got everyone feel her ‘Anaconda’ carried out her green snakeskin smartly. Though she opened herself on the red carpet with an undemanding golden leopard print dress, yet she managed to show most of her tanned skin out there.

Rita Ora – Rita Ora who glammed up the night with her flirtatious devil red dress with a thigh split and a daring cleavage rendering.

Kim Kardashian – Overwhelmed with simplicity and class of her own, Kim Kardashian who flaunted her cleavage in front the fans in a printed Balmain dress along with her younger sisters Kendall and Kylie Jenner who couldn’t help but steal the title of Women in Black.

Ariana Grande – The young celebrity who opened the stage in shimmery short dress was found hugging Jessie J on the red carpet in an all-black dress. Already on the top of charts, she took the spotlight on the VMAs 2014 as well.

Miley Cyrus – Infamous for her on-stage twerk session with Robin Thicke and that skin-tight latex dress, this time Miley Cyrus decided to play it safe at the VMAs 2014 by wearing black on black.

Gwen Stefani – On the VMAs 2014, she didn’t seem to attend the event to attract many flashlights, but we found her chic pink dress very sexy and sovereign at the same time.

Katie Stevens – In her sober white translucent laced dress, she engrossed more expressions of wow than other celebrities summed up. It felt like she too was a part of the ‘Femur Flesh Exposure’ revolution.